Introduction to Old Mine Diamonds

Old Mine Diamonds, what are they actually? In my opinion, “Old Mine” is a 20th century nomenclature given to all older diamonds cut in the brilliant style no matter their shape. More often used with shapes resembling the Peruzzi styles cut over the past centuries.

To allow a sense of time, one of the first recorded Old Mine diamond is the present Wittelsbach-Graff. The diamond was known for centuries as the Wittelsbach Blue, the crown jewel of the Bavarian royal family. It was cut some time before 1664 when it was first mentioned.

Old Mine diamonds came in many shapes and proportions, there was no standard, some were playing the lights beautifully and some less but for certain they all possessed that special character which is plausible to the eyes, that limpid water diamonds are famous for. 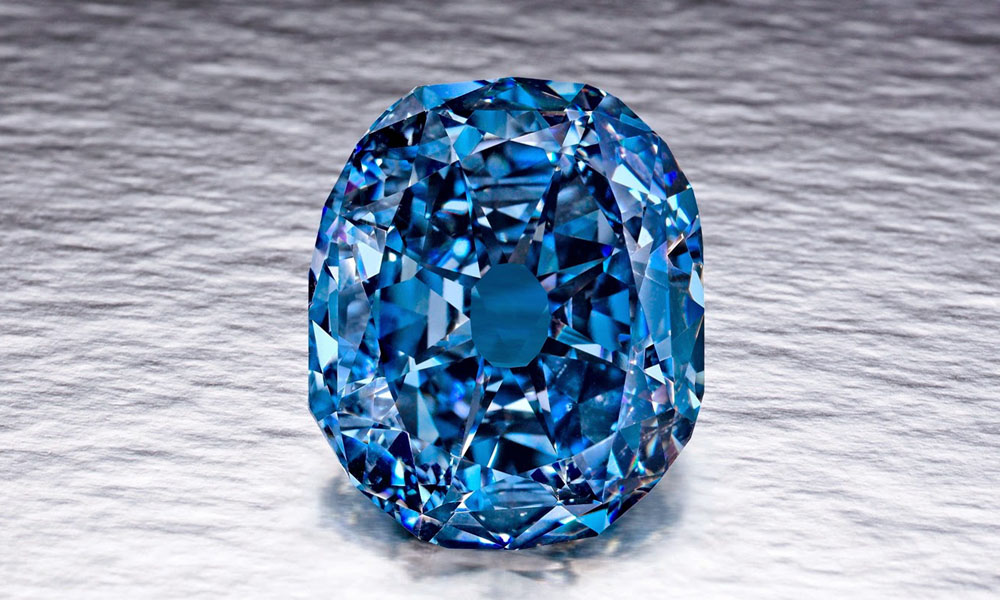 Old Mine Cushion cut diamonds had basically two certainties, a three dimensional structure and an eight fold faceting symmetry which with the brillianteering, a table and culet summed up to 58 facets. (e.g. Brilliant style)

The natural (octahedral) diamond form is historically responsible for the cushion outlines which populated bygone eras. Shape consistency was of less importance, play-of-light on the other hand was a priority.

Historically, the blocking of the Diamond determined the shape, when 8 main crown and pavilion facets were cut, the border in-between both sections created a natural knife-edge girdle. This process formed a natural type of octagonal outline to the diamond.

The next step, upper and lower girdle facets (16 on each sides of the girdle) were added, this process further split the octagonal shape allowing a natural development of a more rounded cushiony shape, thus the cushion shape was born.

As progression slowly advanced, cutters used to hand-grind (bruting) a girdle which divided the diamond into two sections, a crown and pavilion, when the required thickness and evenness of the bruting plane was obtained, the diamond’s shape was basically determined.

Naturally, primitive processes as such created cuts with wonky shapes, uneven facet sizes, shapes and angles which played an influential role on the diamond’s play-of-light.

Characteristics and proportions also depended on the rough diamond structure, was the girdle belt positioned in the center of the rough crystal? Or perhaps wobbly across both sections of the crown and pavilion? In any case, the cutter needed to work with what he had.

Working its way through the faceting of the diamond, the intermediate results would be a single cut (8x8) faceted diamond which possessed a table facet, eight main crown and pavilion facets and a large culet facet with a thinner albeit rough girdle dividing the two sections.

Brillianteering was a wonderful and important evolvement which helped eliminate a problem but at the same time added an important property to the optical capabilities of the diamond.

Firstly, the process of brillianteering further divided the eight crown and pavilion facets into smaller facets. Those would split the very large and slow flash events derived from the eightfold (single cut) symmetry into fifty six facets. This process added the play of brilliance, fire and scintillation which is today an integral part of the diamonds beauty.

Secondly, while polishing the upper and lower girdle facets, cutters could have utilized this procedure to further thin and even out the rough girdle so to minimize its rough reflection within the diamond. This is a main reason many Old Mine diamonds possess knife-edge girdles which commonly chip with years of wear & tear.

Most Old Mine diamonds were asymmetrical, Centuries long evolution was required to reach the symmetry levels of the 20th century. Old Mine diamonds had no uniformity, they were unique each in their own right. Their mystery, charm and beauty are prized through acquired taste.

What is a modern cushion?
With the development of the round brilliant or what we call today Old European Cuts, cushion shaped diamonds were being cut less and less and halted around the first quarter of the 20th century. Some specials (very large diamonds) and smaller melee size cushions were still being cut, both for seperate reasons.

Cushion cuts emerged again in the early 1990’s when cutters noticed they can retain color when cutting colored diamonds, dare I say this sparked a fancy colored revolution? Other than colored diamonds I don’t remember seeing a standard sized colorless modern cushion until 1998, literally! Modern cushion cuts only started to become popular in the first decade of next millennium.

The modern cushion’s characteristics and proportions are based on modern cutting techniques and standards developed in the 20th century. They are cut to satisfy proportion sets and appearances expected from any other modern cut, shiny, sparkly, brilliant and most importantly beautiful. They are expected to be cut within modern proportion numbers, the current “norm” of acceptable table %’s, total depth %’s, facet angles etc.

Modern cushions are also expected to deliver similar production yields to their other modern counterparts. This forces them to fall within fancy cut price brackets. In my opinion, this makes one of the major downfalls in their present marketing schemes.

Since modern standards don’t exist and were never developed for cushions yet, there is a jungle of cushion cut diamonds being cut, modern cushion cut diamonds are the most complicated diamonds to purchase, both for the average professional and consumer. Their grading reports never reflect their beauty potential, no matter the numbers and cutting descriptions.

Modern cushions are cut into myriad faceting designs from mimicking radiant and princess cut faceting to standard brilliant faceting and every possible hybrid combination in between. On some rare occurrence step-cut cushions can also be spotted.

Comparison between old mine cushions and modern cushions Diamonds

The majority of modern cushion are cut within acceptable modern fancy cut proportions as shown in the following examples:
Tables not exceeding 68-69% but not smaller than 58%+/-
Total depth not exceeding 69.9% and not under 63%+/-
Crown heights, just high enough to accommodate sawing divisions allowing production of (at least) two economically feasible diamonds from each potential crystal.
Crown angles not steeper than 40 degrees (even though GIA dismissed this comment from their grading reports a few years back)
Closed, pointy culet.

Their pavilion facet styles are mostly dependent on the original rough shape and its irregularities. Each planner/cutter chooses the pavilion facet style based on economic priorities such as production yields etc.. The majority are modified brilliant type faceting in order to save weight or as in the colored diamonds example, to retain as much color as possible.

Old Mine diamonds had no standards to begin with, they are actual free-form lapidary creations of historical and primitive cutters who similarly to their modern counterparts also attempted to save weight but didn’t have as many compromising options in regards to diamond’s play-of-light potential as modern cutters have presently.

The placement of crown & pavilion facets on asymmetrical forms needed to correlate in order to propagate light back to the viewers enjoyment. This is the reason why old mine diamonds appear each with their own charm, character and light display. In essence old mine diamonds are considered a true art form.

Beautiful Old Mine diamonds can be seen with opposite (bad) proportions to the norm but still be considered beautiful and extremely sought after by connoisseurs. 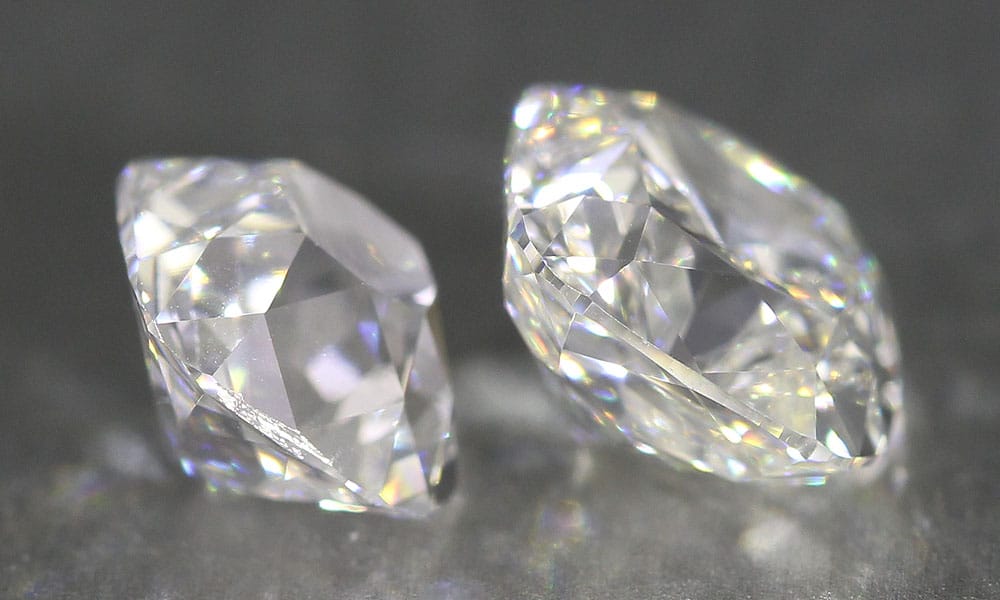 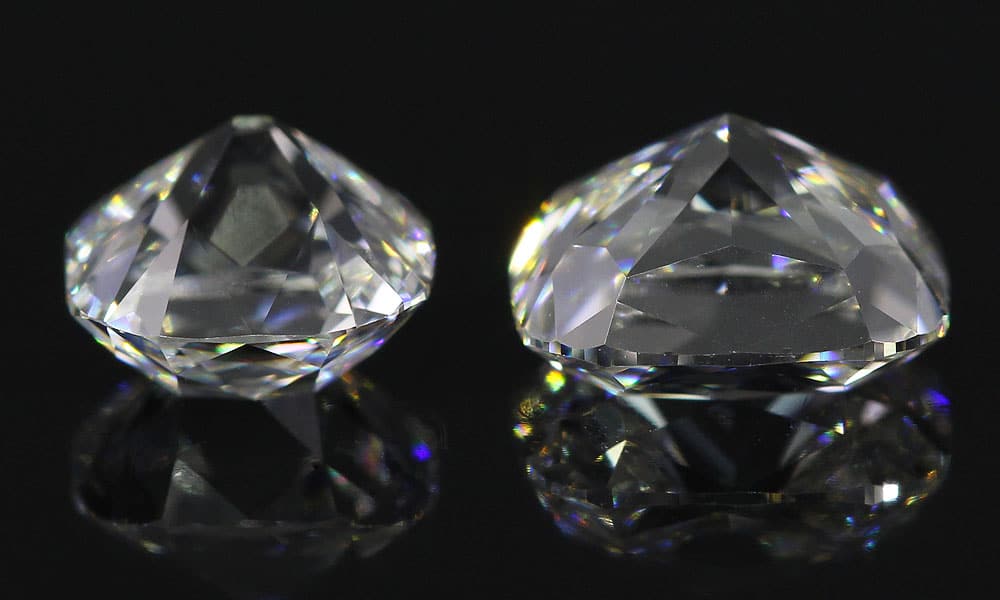 Old Mine Cushions are in existence only because they were a natural evolvement of the history of diamond cutting. Each and every diamond was cut to reflect brilliance or a certain play-of-light based on the available lighting conditions of the different periods.

Some can be extremely beautiful and will attract human focus as they play lights differently to the more common diamonds offered today. Some on the other hand can be less attractive as far as their play-of-lights but might possess charm & character which will save them from eventually being recut.

These diamonds were cut over centuries with limited and primitive tooling, techniques and understanding of the material, after all, diamond is the hardest mineral substance on earth. It always awes me when I study an Old Mine diamond up-close and can actually read its cutting story! Each Old Mine diamond comes with its own personal story!

Modern Cushions are a resurgence and were born to satisfy color retention techniques in fancy colored diamonds. During their first years of extremely limited production, only a handful of cutters were offering colorless cushion cut diamonds. During these early years one could have found more standard 57 facet cushion brilliants and less cushion modified brilliants as those were exclusively kept for colored diamonds.

Unfortunately a short two decade R&D period didn’t compliment the cut much. Today, cushion modified models dominate the market scene, the only cushion thing about them is their shape as they display a myriad of appearances with mostly no uniformity and/or consistency. Similar to Old Mine Cushions, some can look spectacular and some much less, but those don’t offer the visual character and charm of the Old Mine cushions.

Modern cushions are planned and cut to satisfy modern consumer tastes and expectations, their cutting styles reflect modern diamond optical appearances. Their light returns are a more splintery based brilliance, high dosage scintillation and as much fire as possible. Just what a diamond is intended to look like now a days.

To remedy this situation, cushions must be valued differently than they are today. In its simple form which I must admit is my favorite, a modern cushion requires a cushion outline with a correctly proportioned standard brilliant facet style. Such can’t be cut economically as long as cushions are being valued similarly to other fancy cut diamonds. By the industry stubbornness to continue and value cushions in this manner, proper cutting evolution cannot continue.