Not All Diamonds are Cuttable, some don’t get to sparkle

The Diamond cutting process is much complicated than one might think. Unlike all other gemstones, Diamonds are considered the hardest material/substance on earth. Cutting & polishing a Diamond is sometimes even impossible!

A Diamond planner & cutter needs to be familiar with the different surfaces of rough Diamonds. They must be able to determine the polishing or facet grain directions in order to successfully plan, cut and polish a Diamond.

Since Diamonds are never equal, we sometimes stumble upon specially stubborn Diamonds which will under no circumstance allow the cutting of it. These Diamonds are usually made up of numerous intertwining Diamond grain directions which in its simplest version are called macles (type of rough Diamond), in the example below (figure 1), multiple internal macles (plurality of different grain directions). 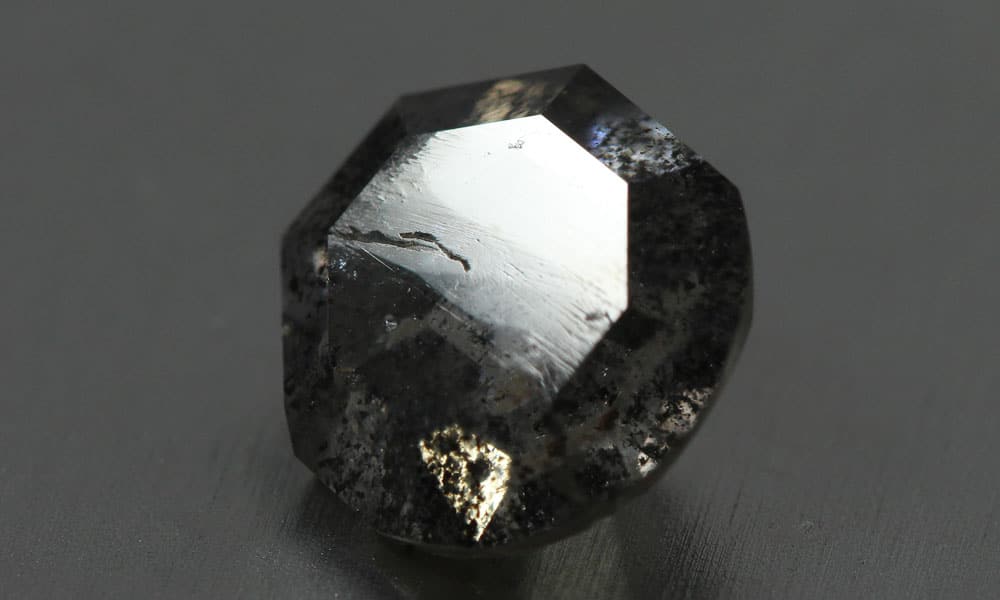 Besides twining grain directions we can also add certain inclusions which are too responsible for not allowing a Diamond to be cut and/or polished, one example is what we call “knots” or “naats”, these are inclusions which are actually very small internal (and separate) Diamonds inside a Diamond.

When their grain directions are similar to the main Diamond then the worst case scenario can be a simple raised area on the facet (which can also be complicated to achieve), but if their grain direction are different and they appear in groups (which is usually the case) they can halt the cutting process of a Diamond entirely.

This picture (figure 2) is of a Diamond which was attempted to be cut around 30 years ago by my late father, clearly noticeable on the table reflection are the signs of multiple and unsuccessful attempts at cutting and polishing a table facet. 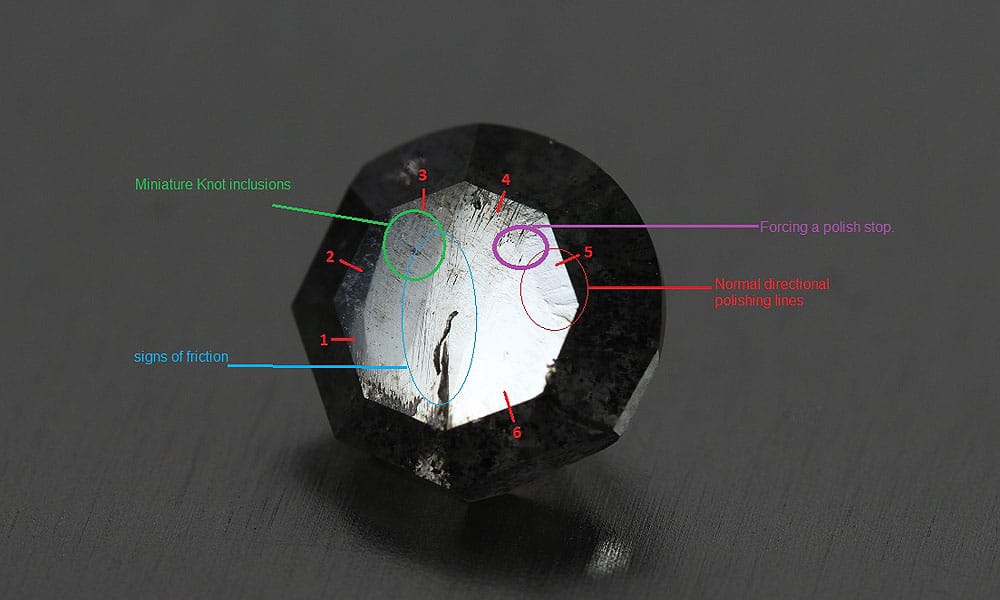 I am counting at least six different (but very close) attempted polish angles (1 to 6). On the upper left side of the table are many miniature “knot” inclusions (green circled) which don’t allow the cutting, more signs of unwanted friction can be visible as miniature vertical lines (center, blue circled).
The only normal polishing directional signs can be seen in the top right area of the rather semi smoothed polish (red circle) and the point where the polish halted as it approached the “Knot” area (top purple circle).

Some beautiful and rare materials such as vivid yellow rough Diamonds from Zimmi, a small town in Pujehun District, Sierra Leone which is famous for its orangey vivid yellow hues are considered very sensitive rough material which seldom develop feather inclusions during the various cutting and polishing stages.
In the example in Figure 3, I planned the Diamond with the purpose of avoiding the process of sawing (dividing) the Diamond. Since I was familiar with its sensitivity status, and even then, after grinding the top (satellite stone) for the table facet placement and then adding the four crown facets, numerous feathers developed causing the Diamond an almost total loss of its transparency which inclined me to abort the cutting process altogether. 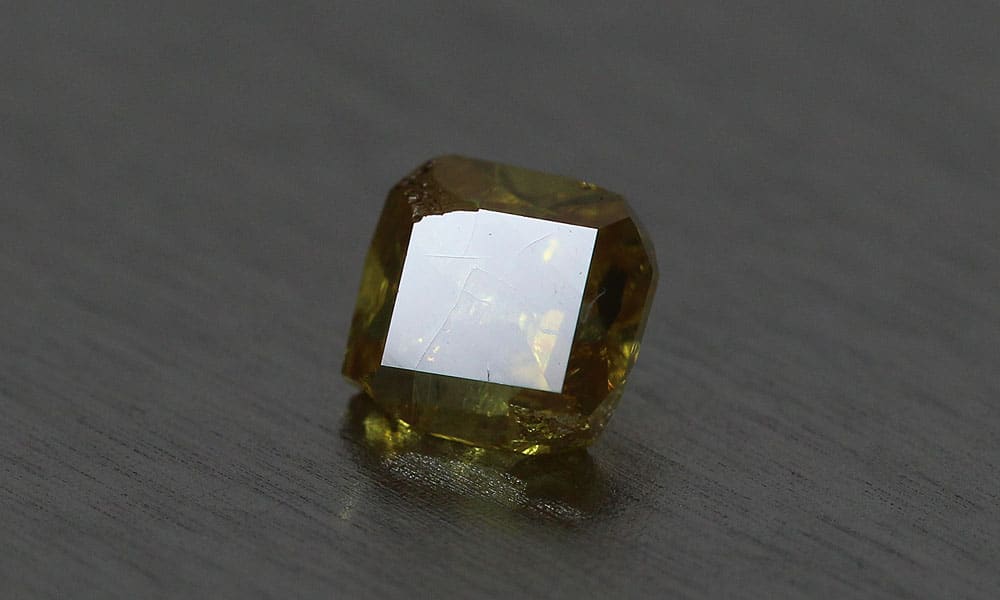 Figure 4 shows the table reflection of said Diamond, if you look closer you can notice the open surface marks showing how the feathers developed in the cutting process. Bare in mind this was supposed to be an inclusion free Diamond. 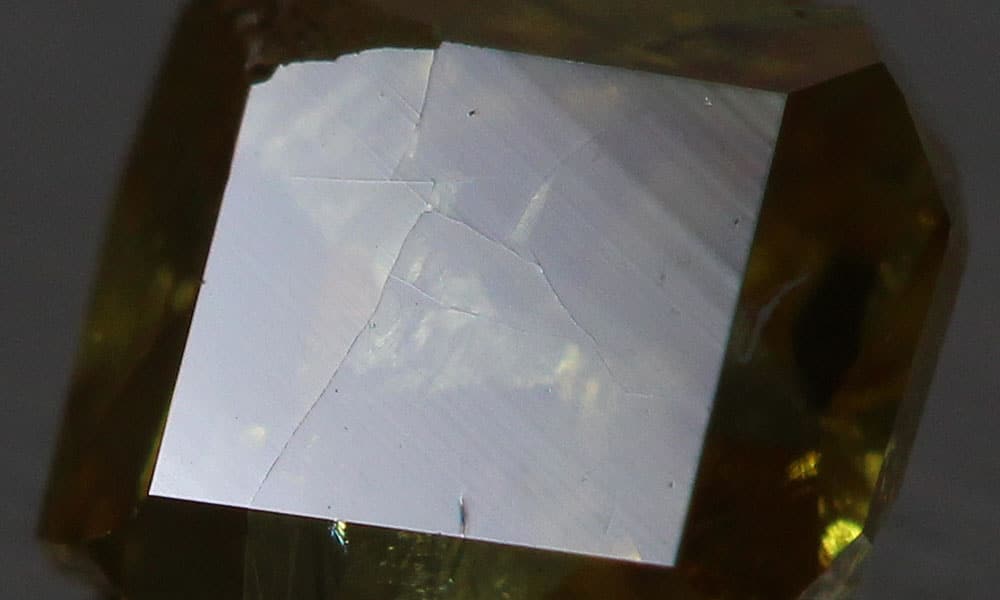 In Figure 5, it’s pretty easy to visualize the optical damage such feathers caused. Practically the feathers will obstruct most light return potential. A pity for such a great and rare color. 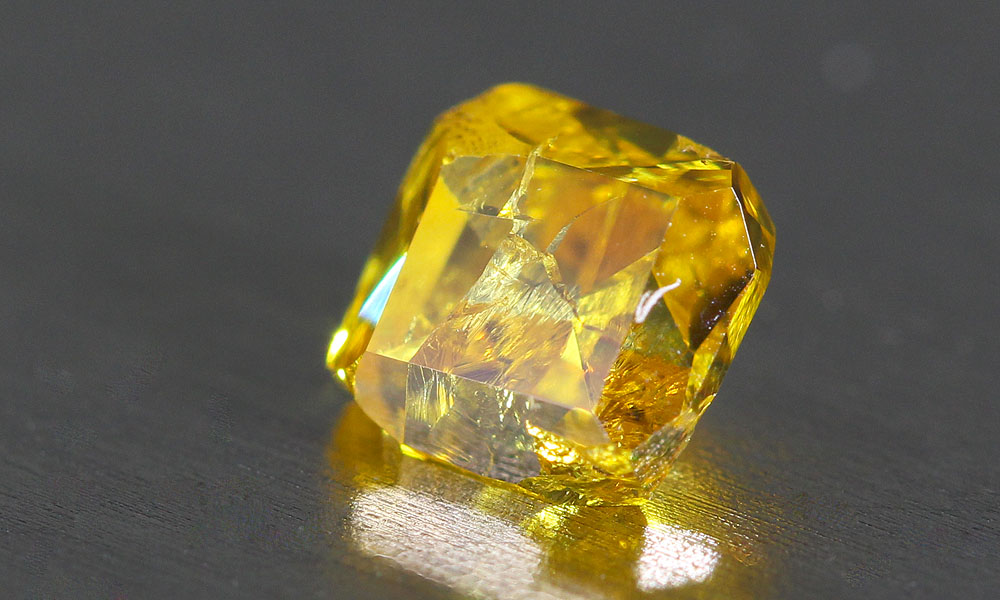 Another Zimmi rough Diamond which was planned for sawing got damaged by internal feathers within the laser sawing process. Figure 6 is showing the Diamond after the sawing (division) into two separate Diamonds. Clearly noticeable in this picture is the surface displaying the laser marks originating in the sawing process. In this stage its still quite difficult to pick up on the surface opening of the feathers. In the next image (Figure 7), a horizontal fine line is noticeable which shows the open surface marks that is evidence of the feather which developed during the laser sawing process (The other vertical feather is not noticeable in this picture). 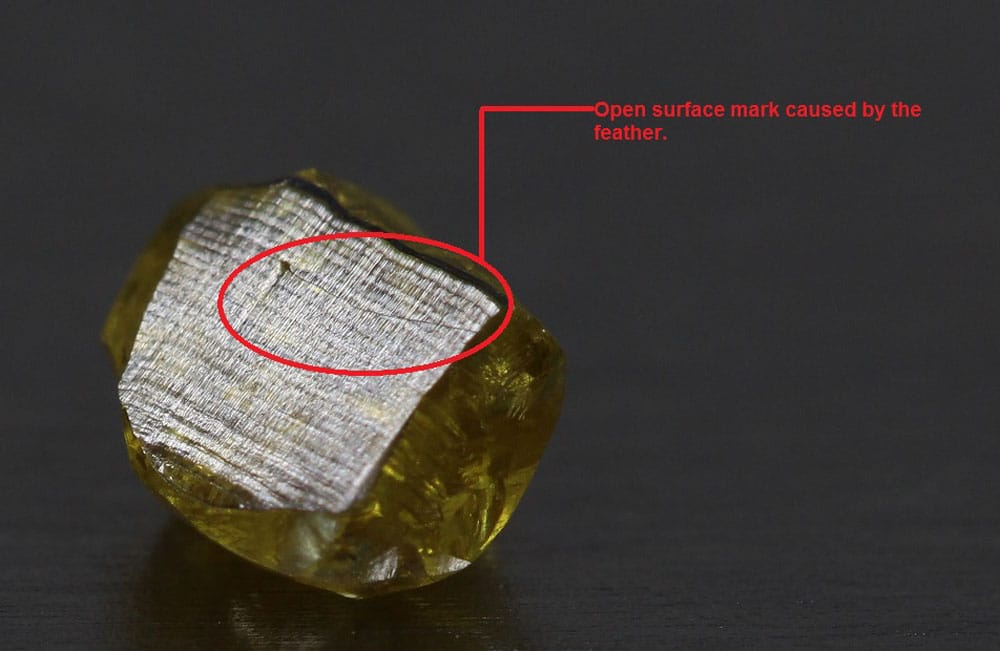 Once we lit the Diamond with direct light, now one can clearly notice the “T” shaped feather which developed during the sawing process (Figure 8).