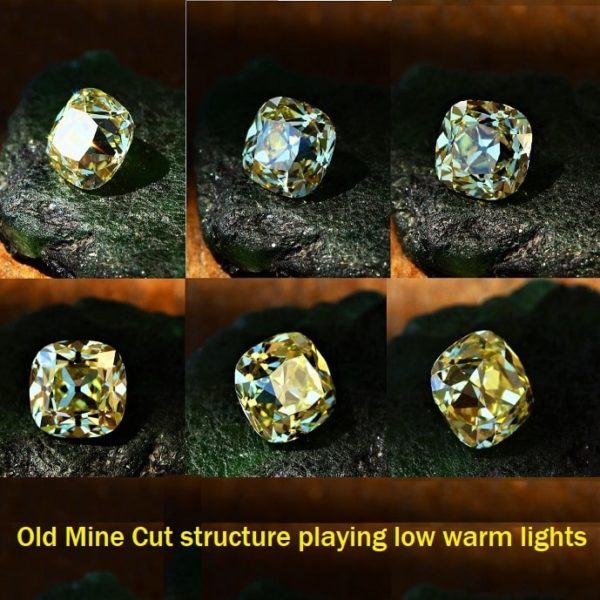 Diamonds, if configured correctly don’t really need a lot of lights to display their optical wonders.

Actually…, diamonds should also be able to entertain our visions and senses in low-warm lighting environments…, after all, diamonds managed pretty well before the invention of the electric light.

When diamonds are cut to three dimensional faceted structures, their ability to play the lights are still very valid. Unfortunately most modern diamond cuts lack three dimensionality structures and miss displaying this phenomena.

The yellow Old Mine Cut diamond playing role in the pictured collage is exhibiting how it is playing the low lights in various positions relative to the light source. The top row shows the diamond facing the light source as it orbits away, and the bottom row showing the diamond from its faceup position orbiting towards the dark zone.

The rather large facet surfaces of the Old Mine Cut in conjunction with its three dimensionality creates a balanced mixture of on-off lighting and contrast effects. Such configurations work very well in many lighting environments each displaying its exclusive optical wonder.

Introducing our fifth Pinky Ring in a series. For this ring, we upped the ante bringing it to another level for both its uniqueness and design complications. Merging between old-world gems, diamonds...
Read More