Diamond angles or slopes are just one designed element of the overall architectural plan for a diamond. The angles and their placements are responsible for the way light travels through a diamond medium and what will be perceived by the viewers enjoyment.

Cutting a diamond without a plan for facet shapes, sizes and angles is like building a house without the interior plans and divisions.

Diamond cutting or polishing initially started for the main purpose of attempting to cut out rough-form irregularities and unattractive visible inclusions. Raw diamonds come in all sorts of forms and surface-textures which required human intervention to beautify their potential appearances.

The development of the diamond polishing wheel or also known as Scaife in the *15th century by the Belgian diamond polisher Lodewijk van Berken allowed for the first time the application of flat polished surfaces onto rough diamond surfaces.

During the said period (15th century), cutters would apply randomly placed facets, which displayed a noticeable surface-reflective play-of-light pleasurable to our human vision. More importantly, it also allowed a clear view into the internal material of the diamond otherwise covered with raw external surfaces

* Some lapidary wheels for colored gems were already existent in the 14th. Century, it could possibly be that diamond polishing started prior to the Lodewijk van Berken era. The Forefathers of Light Reflections

According to historical literature, Henry Morse of Boston was the first person to establish a diamond cutting facility in the United States, records show the facility was established during the second half of the 19th. century.

The “Morse Diamond Cutting Company” was established around 1875, and again, according to literature, Morse arrived at his preferred facet angle combinations and proportions for the standard 58 facet round brilliant by physical trial & error.

His round brilliant cutting style would eventually earn the trade name of “the American Round Brilliant” and considered by many as the most beautifully performing round brilliant cut for the period. American jewelry houses such as Tiffany & Co. preferred creating their jewels with Morse diamond cuts.

Marcel Tolkowsky, a Belgian mathematician educated in science & engineering wrote his thesis “Diamond Design: A Study of the Reflection and Refraction of Light in a Diamond” in 1919 while studying at the University of London. Standardizing The Round Brilliant Cut

It took a few good centuries for cut evolution to reach the point where mathematical and light calculations were giving serious considerations (Morse – Tolkowsky — circa 1875-1919).

Since then, for about another century, cutters would mainly depend on professional apprentices or word of mouth information and would develop their own optical system for reaching the most brilliant and/or lively round brilliants.

There were no technological tools which could lead cutters to top precise achievements, cutters would depend on visible internal reflections during the process and old historic angle-gauges which were only sufficient and offered limited information regarding the accuracy of proportions applied.

With the turn of the second millennium, gemological laboratories also discovered the importance of precision work in diamond’s proportions and angles. Until then, grading reports would emphasize the historic 4C’s of the last century, cut, color, clarity and carat weight! Worldwide marketing schemes were also dependent on the 4C’s.

As mentioned above, cutters would mainly depend on their personal knowledge and tastes for diamond optics but two gemological laboratories (GIA & AGSL), took it upon themselves to research and develop each their own cutting standards for the round brilliant.

Both GIA & AGSL introduced and implemented cut grades to their gemological grading reports simultaneously (AGSL did pave the way), this positively changed the way cutting facilities around the world would perceive and cut round brilliants for-ever! (no pun intended)

All of these advancements couldn’t have happened without the help of a small Israeli technological company called Sarine Technologies (Sarin-1988) which would revolutionize the industry with the development and rolling out of their first non-contact measuring device.

Sarine Technologies, an Israeli based company was the first to offer the diamond cutting world a device which played out as a compass for cutters. Such a device allowed cutters the ability to always identify their cutting positions in relation to actual diamond angles and proportions throughout their cutting journeys.

This was crucially important for cutters to be able to meet the stringent standards as set forth by the gemological laboratories which now required a much heavier burden on three dimensional precision and accuracy. Actually, without such a technological development, laboratories wouldn’t be able to implement cut grades.

Since then, there were just a handful more companies like OGI Systems and Octonus (Oxygen) which started to develop their own technologies and are currently offering such and similar solutions to the diamond industry at large.

The development of such technologies in conjunction with the cut-grade reports issued by gemological laboratories raised the bar for excellent diamond cutting which we have been witnessing throughout the last three decades.

This small but crucial revolution did develop a better generic round brilliant cut, the general demand for better more precise cuts became a norm.

In the 1990’s, Japan was one of the first countries to demand much higher cut qualities (hence H&A’s). Today it will be very hard to find newly cut round brilliants to loose angle precisions.

Angles, the base structures to light control

Faceting angles are the crucial optical base responsible for the relations between light behavior and design objectives, they are limited and directly dependent on the science of light.

Diamond facets, when placed at certain angles will act as mirrors reflecting both entry of lights rays-paths and their immediate space environments (e.g. objects in the surroundings). Direct light will reflect the most intense light. Indirect light, a softer light intensity. Light will not reflect back if obstructed.

Obstructions translate to any objects in the surrounding space including people and/or other objects. All such factors will play a crucial optical role in the way diamonds play their light and catch our attention. Some balanced obstructions are an essential positive to bring out what we observe as sparkle scintillation.

Garry Holloway from Australia (a close colleague and an important influencer responsible to my personal entry into this mysterious world of diamond optics) and AGS laboratories developed an amazing yet simple tool which translates all this complicated optical information into four colors visible through a reflector called the ASET scope (Angular Spectrum Evaluation Tool).

In general, the colors display where the diamond is catching its light from:

Red: displays direct light from above.

Blue: which shows obstructions of light reflections caused by objects in environmental space.

White: (or see-through) is rather simple and points out to where the light leaks out of the bottom pavilion thus not reflecting back to its viewer. The Angles make the cut

Diamond cut planners and designers must take combined crown (upper) and pavilion (lower) angle combinations into account when cutting diamonds as they are fully interconnected.

Diamonds have a “critical angle” meaning that if the relations between the angles are not placed within these optical limitations, the light entering the diamond will leak out through its pavilion and fail to reflect back to the viewer.

Facet angles and their placements are quite sensitive to light movements and require accurate positioning to become optimal light reflectors. Lights will reflect back if angles are correctly applied, if they are not, facets will either leak light or reflect objects within the environmental space (like the viewer itself, furniture etc…). Localized light obstructions will cause diamonds to appear dark, dull and lifeless.

In plain terms, pavilion facets act as mirrors and will reflect back the environments they catch, this is why the relation between facet angles and light entry are critical in order to produce a well balanced cut and beautiful diamond.

Why angles make the difference

In three dimensional optical-symmetry cuts (e.g. [super] Ideal cuts), extremely tight levels of precision is what actually makes a cut great and stand out from the rest (a great facet configuration is also required). Good light return and what a generic triple X displays is just not sufficient to be called a great cut, some obviously are, but some are less so.

GIA round-off (or average out) facet angles and azimuths in their cut grading method. As long as the cutter maintain positions within the allowed max-min ranges the diamond will earn the current top echelon of triple X (excellent) grade.

3D optical symmetry diamond cutting is much, much more. Light travels through a diamond bouncing off the pavilion facets and returns to the viewers eyes…, yes, but this is only the primary base to optical works. Some light waves entering the diamond will continue their journey inside the diamond bouncing of internal facets numerous times before exiting.

As to avoid further confusion (it gets really complicated), I will try to put this in a lay-men perspective, when light continues its journey within the diamond, it starts developing visible ”virtual facets”. Those are actually reflected facets on actual facets. 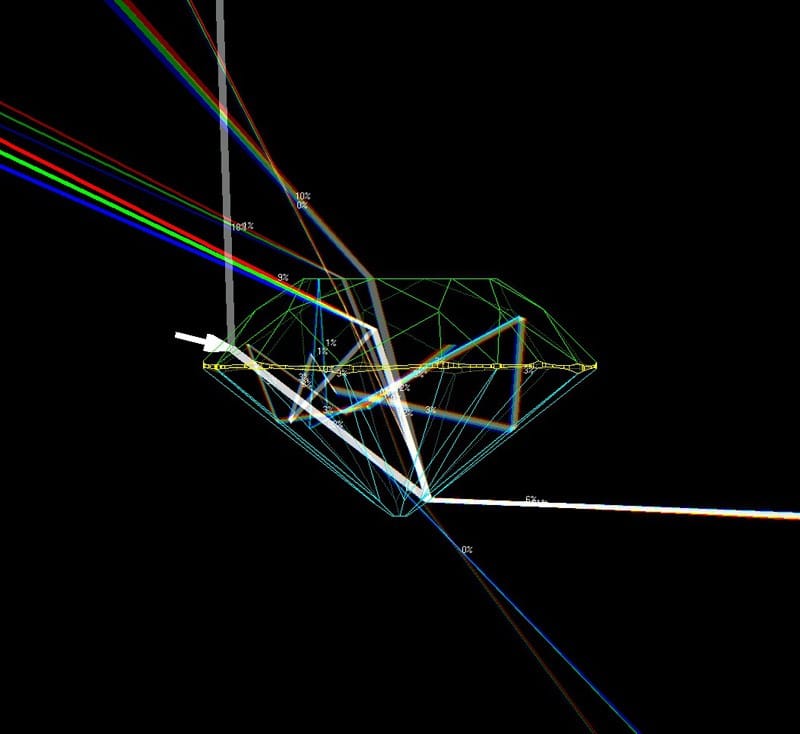 The diamond cutting industry is miniscule when compared to other major industries, the diamond industry’s financial base lays on a total annual rough production turnover of about $15 billion. This means the total investment spend on technological R&D is quite small.

The technologies which were mainly developed in the 1980’s have evolved little since. Most technological tools were developed to serve round brilliants since it is the shape sold most as far as value and quantities. It’s also a simplistic eightfold symmetrical shape which makes it much easier to measure and execute.

Currently the only way to surpass such obstacles and limitations is by human intervention, knowledge and craftsmanship. This is why cutting to the tightest 3D precision levels require lots of human-hours well beyond the information technology assists cutters with.

ETA: Just returned from a trip to Surat, India and was presented with a few new technological innovations and advancements which improve current margins of error to new highs never reached before. I was extremely impressed but this is for another blog.

When discussing diamond angles we are basically talking about the foundations of a diamond cut. The angles are basically the factor that arranges the facet placements and positions which orchestrate the light shows.

Angles are a crucially important factor for diamond appearances, especially for their play-of-light potentials and the way our human vision perceive and get optically attracted.

Throughout history, diamond cutting was a secretive & mysterious practice which was executed primarily by individual cutters and their experiences. There were no standards or formal guidance and depended mostly on trial and error.

As cutting evolved, standards were slowly put into place and modern more accurate tools enabled more control of the cutting processes in general and for angle configurations in particular.

As far as (non-round) fancy shapes, we as an industry are still far from understanding light behaviour within such inconsistent shapes and forms. New technologies are available to assist this segment but unfortunately the planners and designers themselves are still quite distant from their optical potentials.