Colorless Antique Diamonds – not a myth 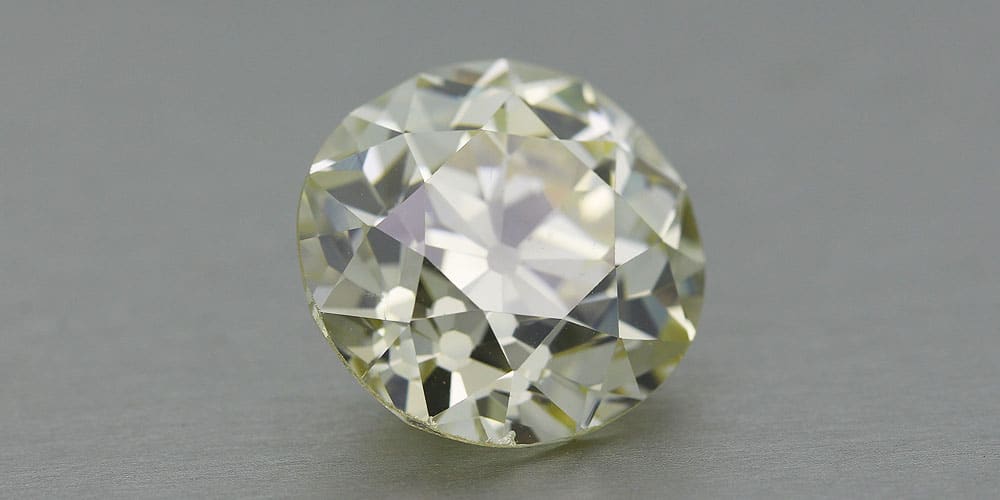 A while ago as I read in one of the more popular Facebook forums about the jewelry industry that most antique Diamonds were of lower (warmer) colors because most originated from the (then) newly discovered South African mines in the later part of the 19th Century. That is indeed not true and a misconception and I would like to explain in this short blog.

Originally Diamonds were first discovered in India but were not really familiar to Westerners until about the beginning of the 16th Century. Recorded colors of Diamonds that came out of India were the whole range of the color palette, from the famous limpid & colorless materials from of the famous Golconda mines such as Kollur to the yellow, brown (and other rarer colors) which were also mined in the Historical Indian mines.

With the depletion of the Indian Diamond mines, a new world and new Diamonds were discovered in Brazil at around the beginning of the 18th Century as miners were originally exploring for gold. Although the quantities recorded were nowhere near the African discovery of Diamonds at the latter part of the 19th Century, Brazilian Diamonds were again found in both colorless and various colored materials.

It’s true that the name Cape was annexed to South African Diamonds and in particular to the yellow(ish) material which were being extracted from numerous South African Diamond mines. Actually it all started because geographic reasons as the Diamond discoveries were in the British Cape Colonies.
At a later time around the beginning of the 20th. Century the Cape word was designated to the yellow colored Diamonds as a color classification mainly as a color assortment in the De Beers monthly allocations and because of a scientist as can be read in the following article by David Federman for Modern Jeweler.

In short, Diamonds mined in either Historical India, Brazil or South Africa came in all colors of the rainbow as well as in colorless material.

Why do we currently find loose antique Diamonds mainly in lower colors?

The main reason we currently find antique Diamonds mostly in the warmer yellower shades is simply because economically they were less rewarding as recutting material for cutters as early as the end of the 19th and which is remarkably still valid presently.

When the likes such as Bostonian Henry Morse started cutting and marketing his new Ideal round brilliant Diamonds in the latter part of the 19th Century and a few decades later European Marcel Tolkowsky published his “Diamond Design” study on the round brilliants, most colorless antique Diamonds were purchased in order to recut to such and similar round brilliants faceting designs. Luckily re-cutting the yellow material were not as rewarding allowing them to survive all those years in which our current market can still enjoy their availability as they keep entering the market via the recycled Diamond channel.

One of the more famous tales of saving a rare antique Old Mine Diamond from being recut belongs to the Historic 36.56 carat Wittelsbach Blue Diamond (presently the 31.06 carat Wittelsbach-Graff Diamond), Historically it could have been the first significant (and recorded) brilliant cut as it dates back to before 1664 and was the centerpiece of the Bavarian Royal Collection. Around 1950-60 the Wittelsbach Blue appeared on the Antwerp market in order to recut it to a more “suitable” modern cut, luckily for a diamantaire by the name of Joseph Komkommer who recognized its potential Historical significance and refused the task, instead he grouped together a few Diamantaires who purchased the Historic Diamond and left it untouched. In 2008 British Diamantair Laurence Graff purchased the Wittelsbach Blue at auction and controversially recut (some say only re-touched) to enhance its color but kept the original shape and most of its facet design. Today thankfully we are able to still connect the dots and identify this Diamond visually to the original Wittelsbach Blue.

Presently we sometimes have the great pleasure of still being able to view wonderful and colorless Antique Old Mine Cut Diamonds mainly in original either important and/or signed jewels from the different Era’s. Some families who were custodians to such remarkable works of art recognized the importance of keeping these gems untouched by modern technology.